Help Saurav Kittu Tank Become World’s First Transgender To Scale Mount Everest
Saurav “Kittu” Tank recently became the first transgender to climb the 6,000 meters high Virgin Peak in Himachal Pradesh’s Spiti Valley. Fondly called “Kittu” by her friends and well-wishers, her achievement was hailed by many including Sports Minister Kiren Rijiju.
Kittu now wants to take on an even bigger challenge – to be precise the “biggest challenge”. She wants to become the first transgender in the world to scale Mount Everest.
Overcoming A Tough Childhood
If you would have told a teenage Kittu that she will one day notch such achievements, she would most likely have looked at you in disbelief.
At the age of 13, Kittu realized that she is transgender. Kittu’s family had always tried to hide her sexuality and subsequently forbade her from even leaving the house. Ultimately at the age of 16, they abandoned her.
Kittu was homeless and was forced to live at the railway station. A group of transgenders subsequently found her and decided to take her in.
Kittu loved to study and play sports but her fate meant she could never pursue higher education. She did not give up and decided to pursue sports instead.
Kittu began training as a wrestler and excelled on the district and state level and was even selected for nationals. Even though she competed in the men’s category, rules forbade her from competing on the national level.
Becoming A Mountaineer
After hitting a wall in wrestling and spending months in distress, Kittu’s luck turned. Accomplished mountaineers Shobhit Sharma and Megha Parmar came to know about Kittu. They decided to take Kittu under their wing and train her. An eager Kittu was only too happy to oblige.
Becoming a mountaineer means rigorous training. Kittu wakes up at 4.30 every day, brisk walks 5 KM to reach the ground. There she runs for 10 KM and then an intense conditioning exercise begins. This is followed by Yoga and an evening cross-fit session. Every other day she walks for 40 KM laden with a 35 kg bag and also runs for 25 KM.
Such intense hard work paid off and she successfully scaled the Virgin Mountain in Himachal.
Help Kittu Become The First Transgender To Scale The Everest
Kittu now wants to challenge herself and do what no transgender has ever done before. She wants to scale the world’s tallest mountain – Mount Everest.
Her coaches Shobhit and Megha Parmar are confident that she is ready to go for glory. They both know what they are talking about. Megha herself scaled Mount Everest in 2019 and Shobhit recently scaled Mount Kosciuszko, Australia’s highest peak. Even government coaches have said that she will easily scale the peak.
The only thing now standing between Kittu and Mount Everest is sponsorship. She needs around Rs 32 lakh to fund her climb to the top of the world. When Kittu is not training she is busy meeting sponsors and officials to seek support. As an added workout, she walks to every meeting.
Kittu is now seeking support from you dear benefactors. She needs to raise adequate funds before 15 February and you are instrumental in helping her do so.
Kittu’s ultimate aim is to improve the lives of other transgenders and this accomplishment will do wonders for the community.
If you find Kittu’s story inspiring, please consider contributing to the campaign. A little support from your side can help fulfill her dream and bring glory to India. Please help her unfurl the Tiranga on Mount Everest. 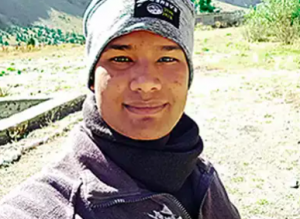 Saurav “Kittu” Tank recently became the first transgender to climb the 6,000 meters high Virgin Peak in Himachal Pradesh’s Spiti Valley. Kittu now wants to take on an even bigger challenge – to be precise the “biggest challenge”.