This verified Fundraiser is in Urgent need of Funds. Please contribute generously!

Thousands of stray animals have died due to starvation during the lockdown, many puppies & animal babies died due to malnutrition. While efforts were rightly being made to help the people adversely affected by the pandemic, the plight of stray animals was largely forgotten. Vidit as a result decided to do something about it.

Vidit Sharma, a Noida resident, feeds and cares for 3,000 stray dogs and 150 cows every day. A common citizen who was inspired to help the voiceless animals, thanks to the values instilled by his family. Taking care of the gentle animals is not cheap and Vidit now needs our help in sustaining and expanding his initiative.

Becoming a Guardian Of Strays

Vidit today feeds around 3,000 stray dogs. Helped by his brother, he has hired the help of four people to cook and distribute the food. Additionally, he has also set up a chara station where food for 100-150 cows is prepared everyday. The feeding starts at 7 am everyday and continues for the next 12 hours.

Small Beginnings With A Big Heart

Vidit had been feeding strays since 2014. He took out a Rs 5 lakh loan and set up a kitchen to cook food for the dogs. He started small, feeding 100 dogs and has never looked back. While he mostly focused on cows, things changed during the Covid-19 lockdown. Vidit realized that due to restaurants and eateries closing down the stray dogs, dependant on leftovers, had no way of feeding themselves.

Vidit wants to feed more animals on a daily basis & also wants to provide medication for animals in need. Raising money is hard and Vidit struggles a lot. On most days he barely has enough to cover the next one week of operations. One some days he had to helplessly stop feeding the dogs as he just did not have the money to afford their food.

The care for animals does not stop here. Vidit has opened a shelter for small puppies, he cares for sick and injured dogs and vaccinates them against deadly diseases like rabies. He also gives them reflective dog collars to avoid the risk of being hit by vehicles and also makes them wear sweaters to save them from the harsh winters. 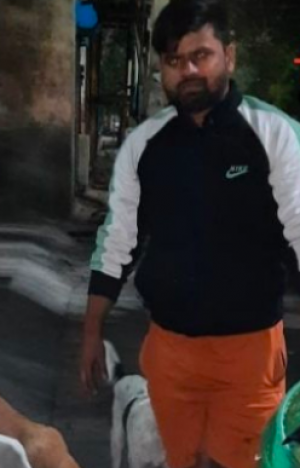 Help Vidit feed thousands of hungry stray animals everyday & also provide medical care to them. Donate generously to help him feed as many animals as possible.